In November/December 2012 we had the pleasure of working on a mega job for Lee & Kerry from Dorset.  Their rig is a Niesmann Bishoff Flair 2004 on an Iveco Daily 60C base. 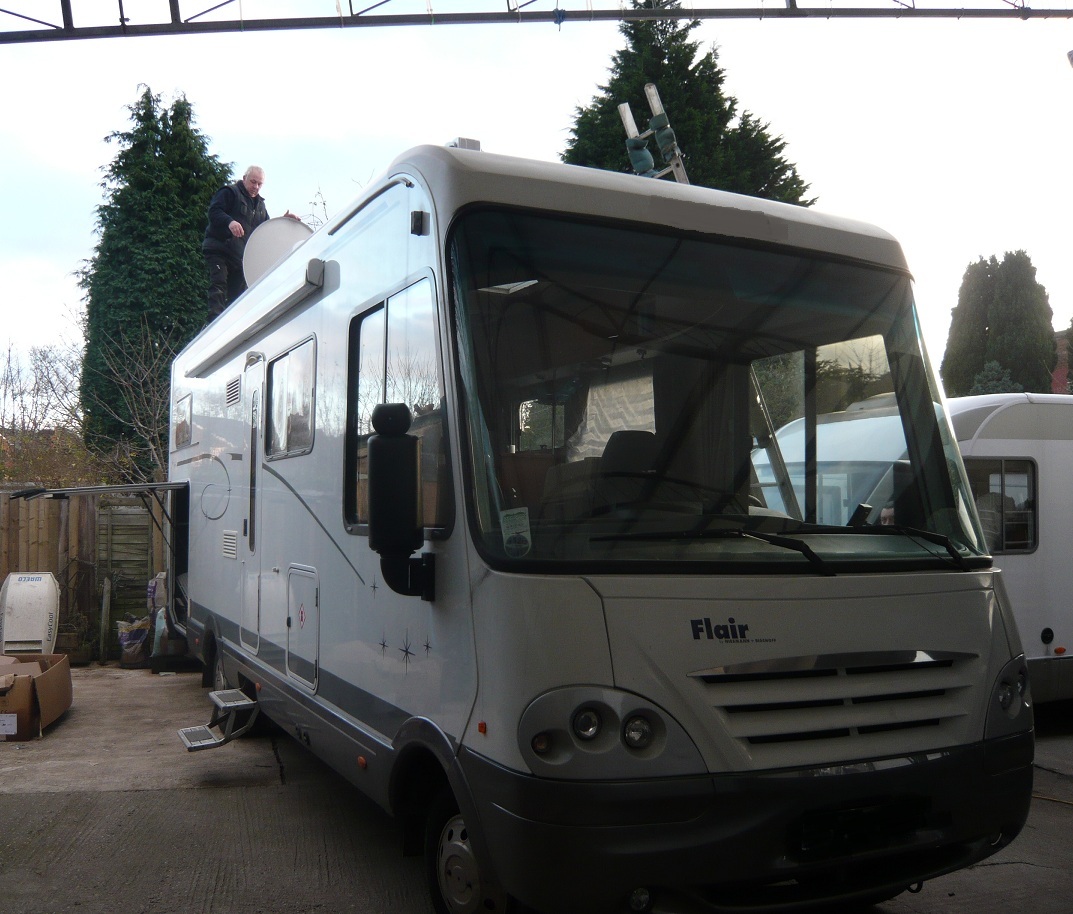 We installed the following:

At first the order was for 4 solar panels, a couple of new batteries and VB Semi Air front and rear.  As time went by Lee & Kerry decided to go for an Oyster Internet system and an inverter-charger combi power unit as well. 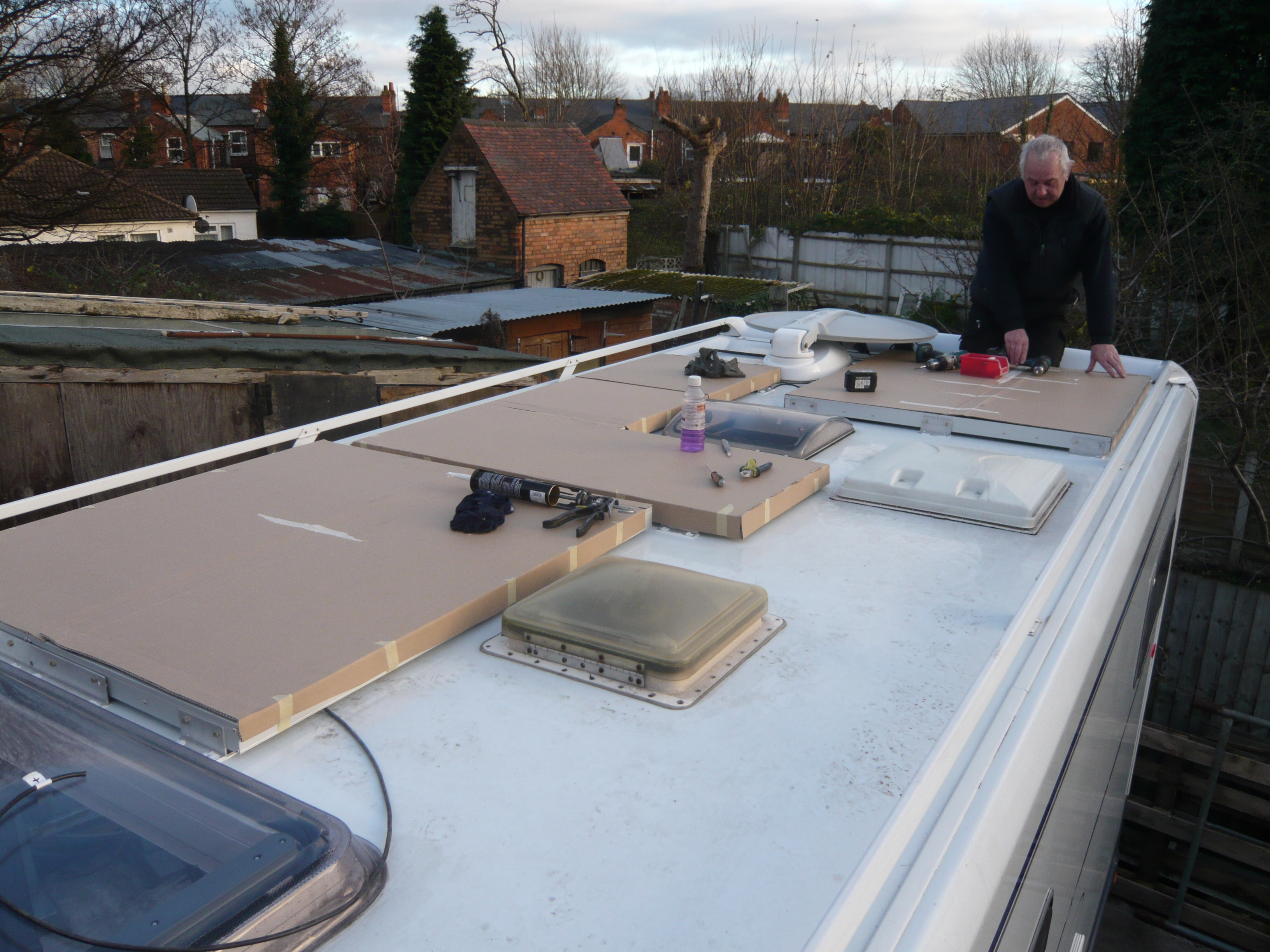 Installing the solar panels was a bit of a jigsaw puzzle.

The motorhome had an efoy installed already but this wasn't producing quite enough power for the type of camping that the customer preferred, i.e. using CL's and wild camping without noise or noisy neighbours!  So they wanted to add the solar panels to boost the charging rate.  At first they thought 4 panels would be ample but it was decided that the best thing to do was to fill up all available space with panels so they had 7!  As this Iveco has a 6 tonne chassis there were no worries about being overladen, which would be a concern on an average motorhome.  We also made sure that they weren't interested in having roof mounted air conditioning or a storage box as they would need to leave room for those in sensible places. 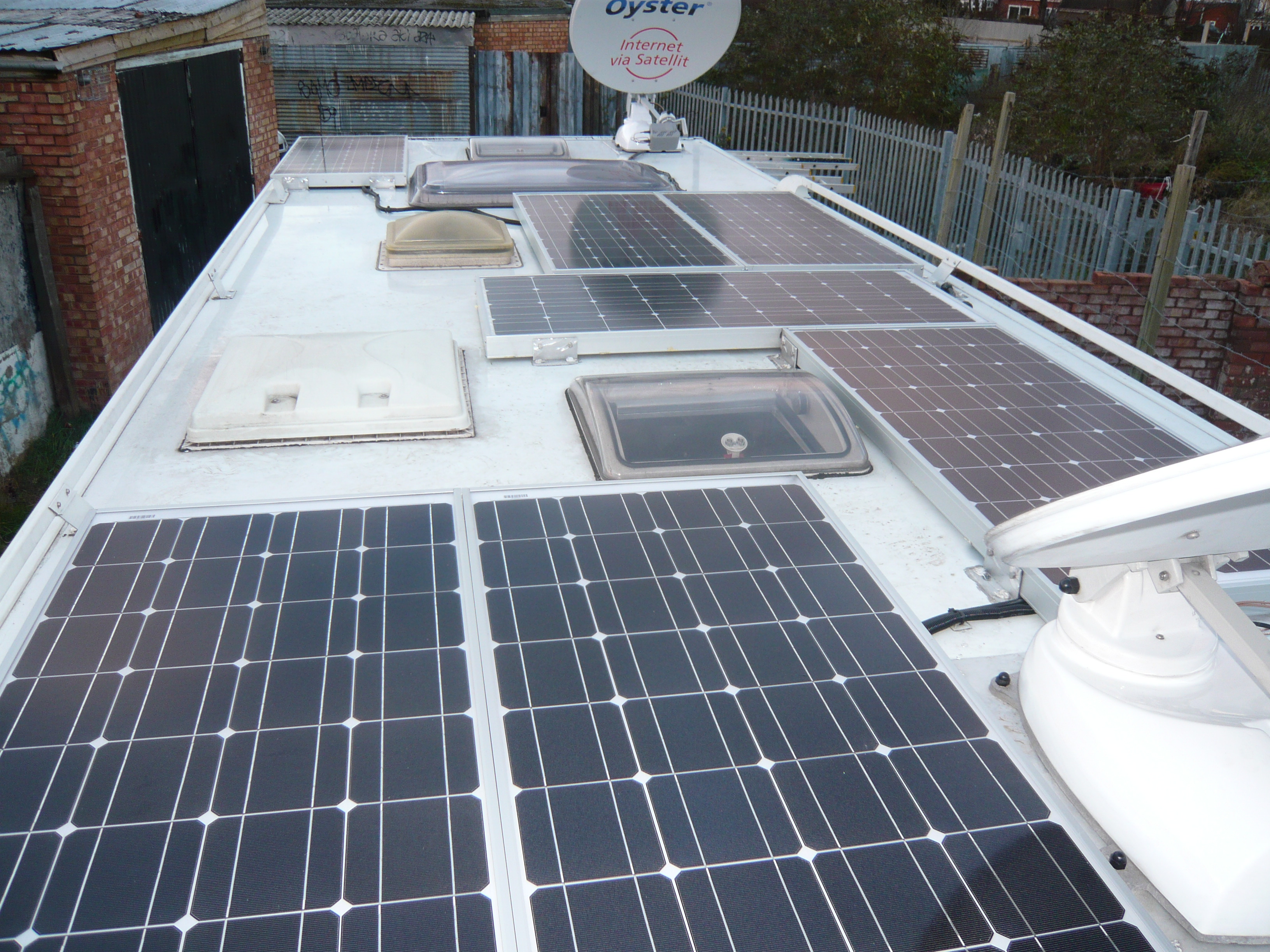 The wiring for the solar panels was all routed to the garage at the back of the motorhome as this had plenty of space and could be right next to the new leisure batteries.  It is important with anything 12v to keep the wiring run as short as possible to preserve the power, long cable runs result in voltage drop which is completely counter-productive.   The original batteries were in a locker on the base of the garage but we removed these and because of the larger size, re-locating the new ones to the positions detailed below.  The following 2 photos show the wiring in the rear garage area, drivers side facing to the rear of the motorhome. 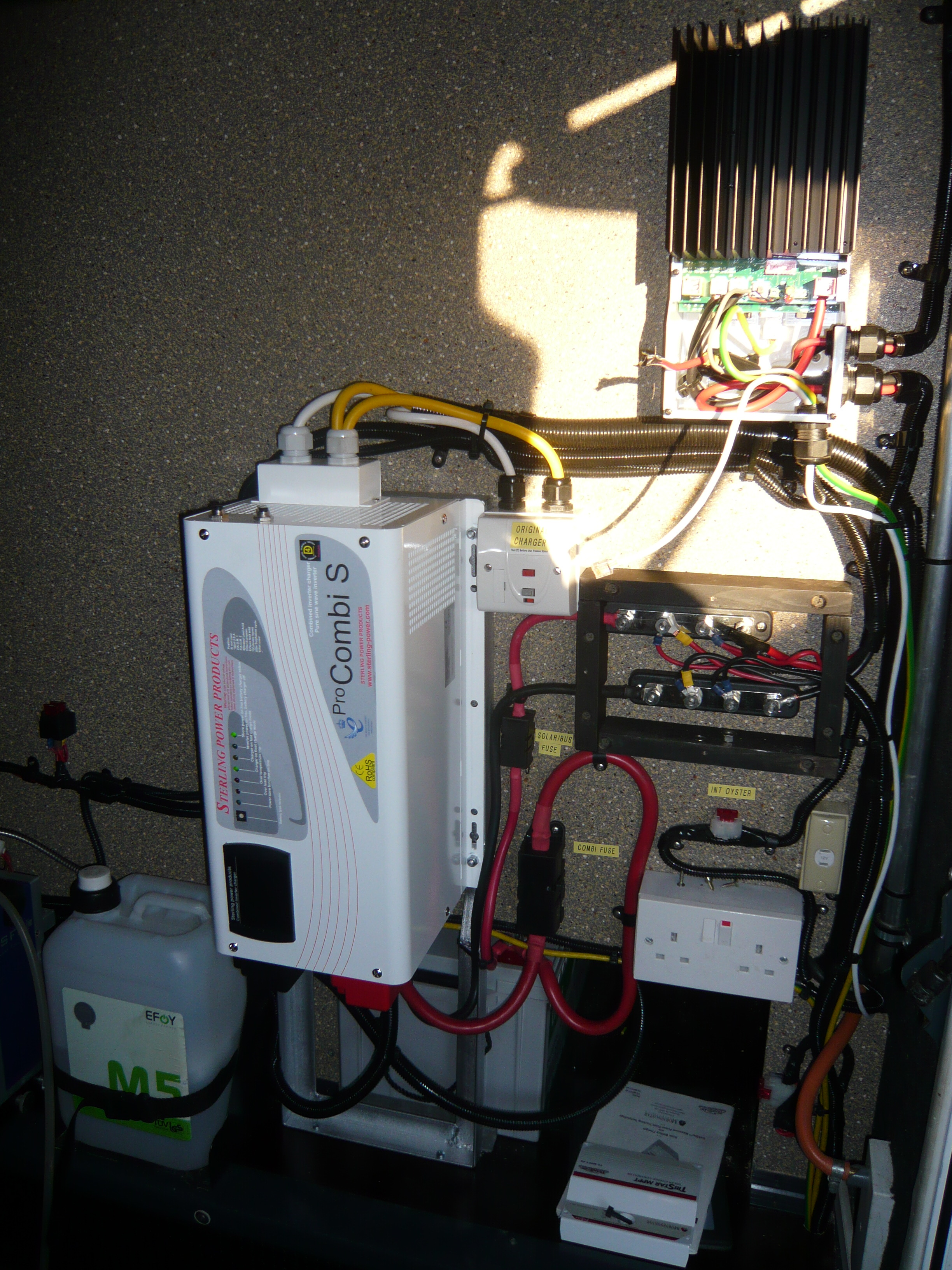 At the top right of the image is the solar regulator (at the point this picture was taken the reg is not connected and has its cover off). Below the reg is the buzz bar with the cover off (I'll get to what that is in a minute..), to the left of the buzz bar is the Sterling Combi unit.  Underneath the combi and behind the rear wall is one of the new batteries - there is another identical battery on the far left of the picture (only just visible in the dark).  The Efoy and its bottle of methanol fuel are between the new batteries.

The Buzz bar is a nifty way to enable more connections to the batteries than just the standard battery lugs it also keeps things much tidier.  Ordinarily there might be 3 or 4 connections directly on the battery but in this case that wasn't possible as the connections were so physically large.  This was because the power systems we installed were carrying high current at 12v so they need very thick wires and therefore large connectors.  The buzz bar has all of the positive connections going to the top row of the bar and the negative going to the bottom row, the cables from the various vehicle systems come in on the right and go out on the left to the batteries.  We had the Combi wired direct to the battery and not through the buzz bar as you can see in the image above the wires needed to be extra thick. 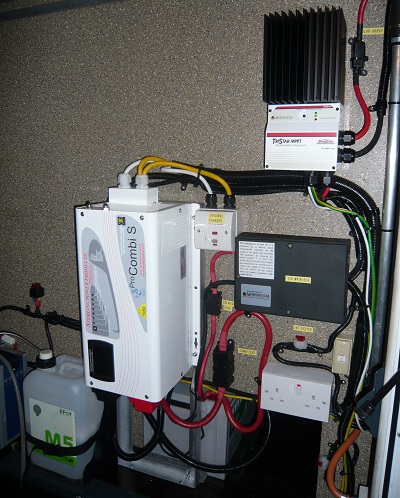 Everything neat and tidy, Electrical connections with covers.

The purpose of an inverter-charger combi unit is to act as a high performance, constant current, battery charger when on mains power then crossover to act as an efficient inverter when on battery – and that's it!  As the batteries had been uprated to high spec it was decided that the charger built into the motorhome was going to be below capacity.  Batteries in some ways are only as good as the charger, so to get the maximum out of the batteries an IUOU charger is the best option.  They also wanted us to install an inverter so fitting this combi meant that we only needed to find space for a single more efficient unit.  The engineers also wired all of the sockets in the motorhome to run using the inverter, a handy touch when wild camping is the order of the day.

End of part one, come back next Friday to read about the rest of the installation.

for our ususual jobs, industry insight and special 'friends' benefits.