Check out this pimped out ex-army truck! 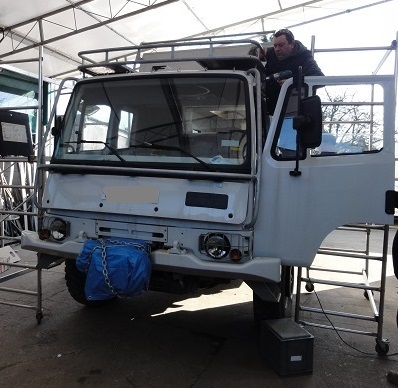 The truck has been converted into a motorhome and has been kitted out in preparation for a round the world tour.  Some bumpy terrain may be on the horizon judging by the state of those wheels!

Waeco do a roof mounted option called CA850 but this truck has a seriously solid roof rack over the cab area so that idea was a no goer.  The other unit available is a split rear wall system called SP950, this has the fan outlets on the inner rear wall with a separate condenser on the outside rear wall of the truck's cab.

There is nothing standard about this truck so we were unable to take advantage of the wide range of vehicle specific mounting kits (available for the vast majority of trucks).  For those occasions where there isn't a mounting plate designed for the job there are some universal kits available which is what had to use in this instance.