Last week we introduced you to Lee & Kerry who have a Niesmann Bischoff Flair.  We have done a huge amount of work on their motorhome this winter.  In the last post we went through the solar panel wiring & Sterling Inverter-Charger Combi.  This week we are looking at the Oyster Internet & VB SemiAir suspension.

There was already an Oyster Vision TV system on the van but being techie-geeks and wanting to have Sky TV and Internet running concurrently without any snags Lee and Kerry decided to go whole hog and have both. 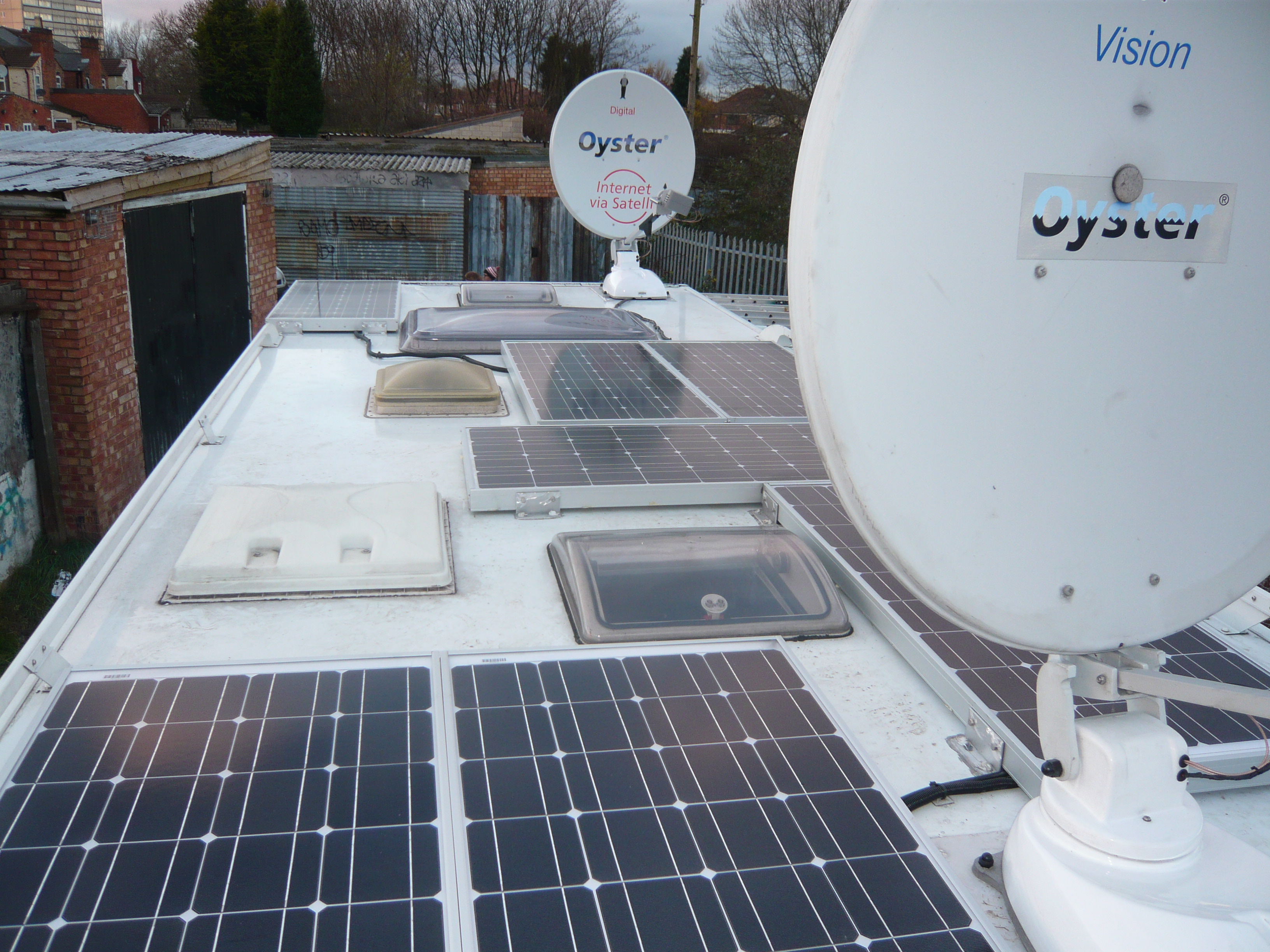 The couple plan to use the motorhome for long periods at a time.  They want to be able to keep in touch with friends and family via VoIP - using Free Speech, email and social media but would also need to be doing work while away.  They would probably also need to connect easily to a remote VPN link.  These were the reasons they chose to go for the Oyster Internet system in the end rather than relying on dongles or hunting around for free wifi in McDonalds car parks.  They wanted the convenience of it just to work wherever and whenever with a reliable signal strength and at a speed that was more gazelle than hippo!  So that they didn't have to connect using an ethernet cable they chose to go for the cradlepoint router, this way they have a secure wifi zone in and around the motorhome that runs on 12v.

After a few years of use its worth giving an Oyster system a service.  Over time the gears get creaky and dry and the LNB can degrade.  When we service a system we strip it down, check that all the seals are still in good order, grease up the pins & gears and change the LNB if it's causing signal problems. This keeps the dish working as well as it always did and ready to face another year of searching the skies.

The Niesmann Bischoff Flair has a large garage at the rear, but has quite a long overhang past the rear axles.  In this instance it is used to store 2 motorbikes which are obviously fairly hefty.  The extra weight so far from the rear axle levers down on the suspension and has the effect of being even heavier.  Motorhomes are consistently heavily laden, making them ideal vehicles to have air suspension.   Although the chassis was rated for 6 tonnes, it wasn't doing the suspension any good having such a big lump of weight so far back in the van, it also meant that the ride height was very low at the back. 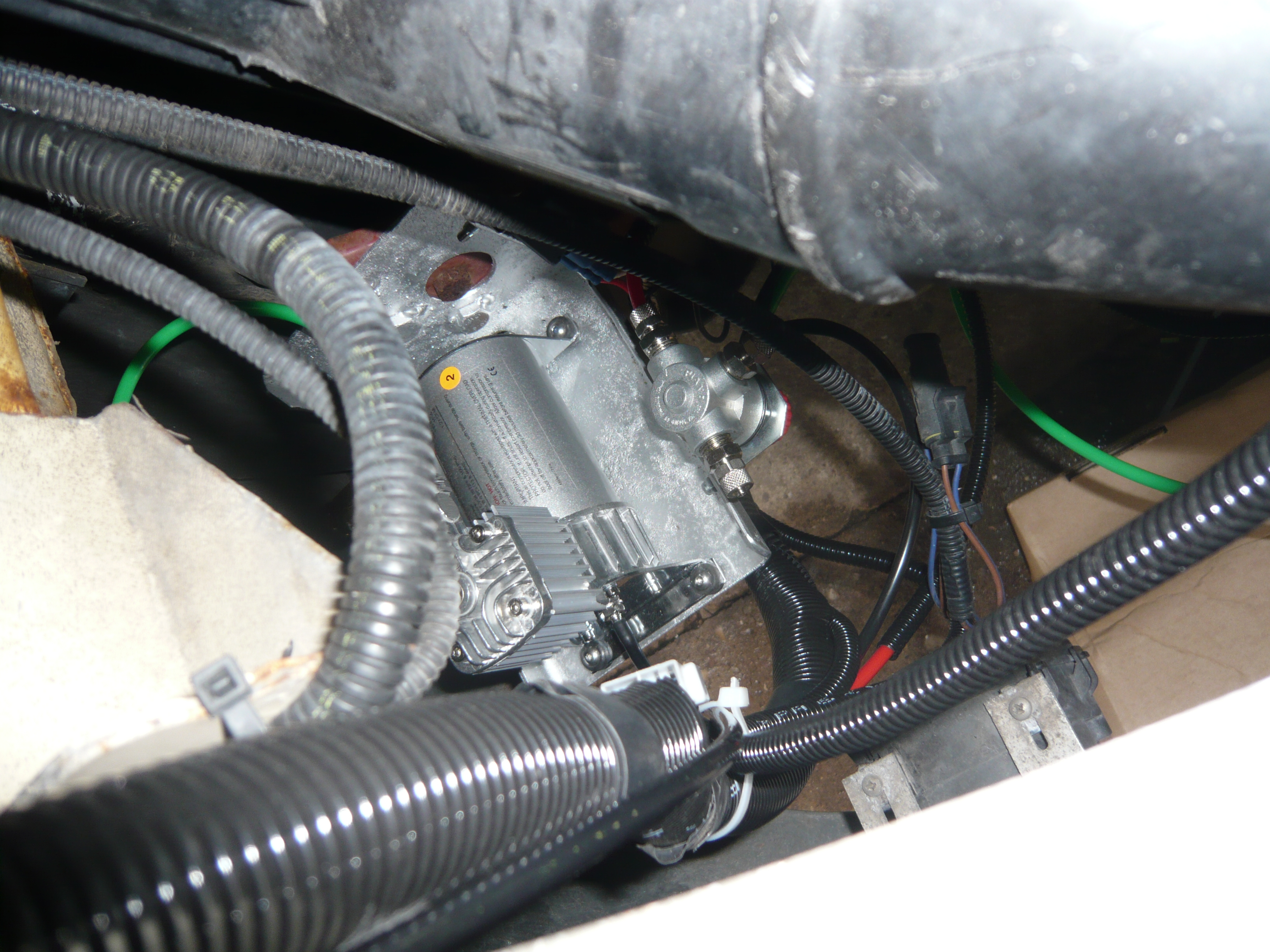 VB-SemiAir consists of a bellow (airbag) fitted on each side between the chassis and the axle to supplement the existing leaf spring, this can either be rear only or on the front too; there is also an optional heavy duty compressor.  The compressor allows for the driver to be able to adjust the ride height themselves, without the compressor the airbag is filled by the installer and is not adjustable by the user.   Lee and Kerry wanted to be able to adjust the suspension height regardless of the weight in the motorhome, because of this they went for front and rear semi air suspension with the compressor. 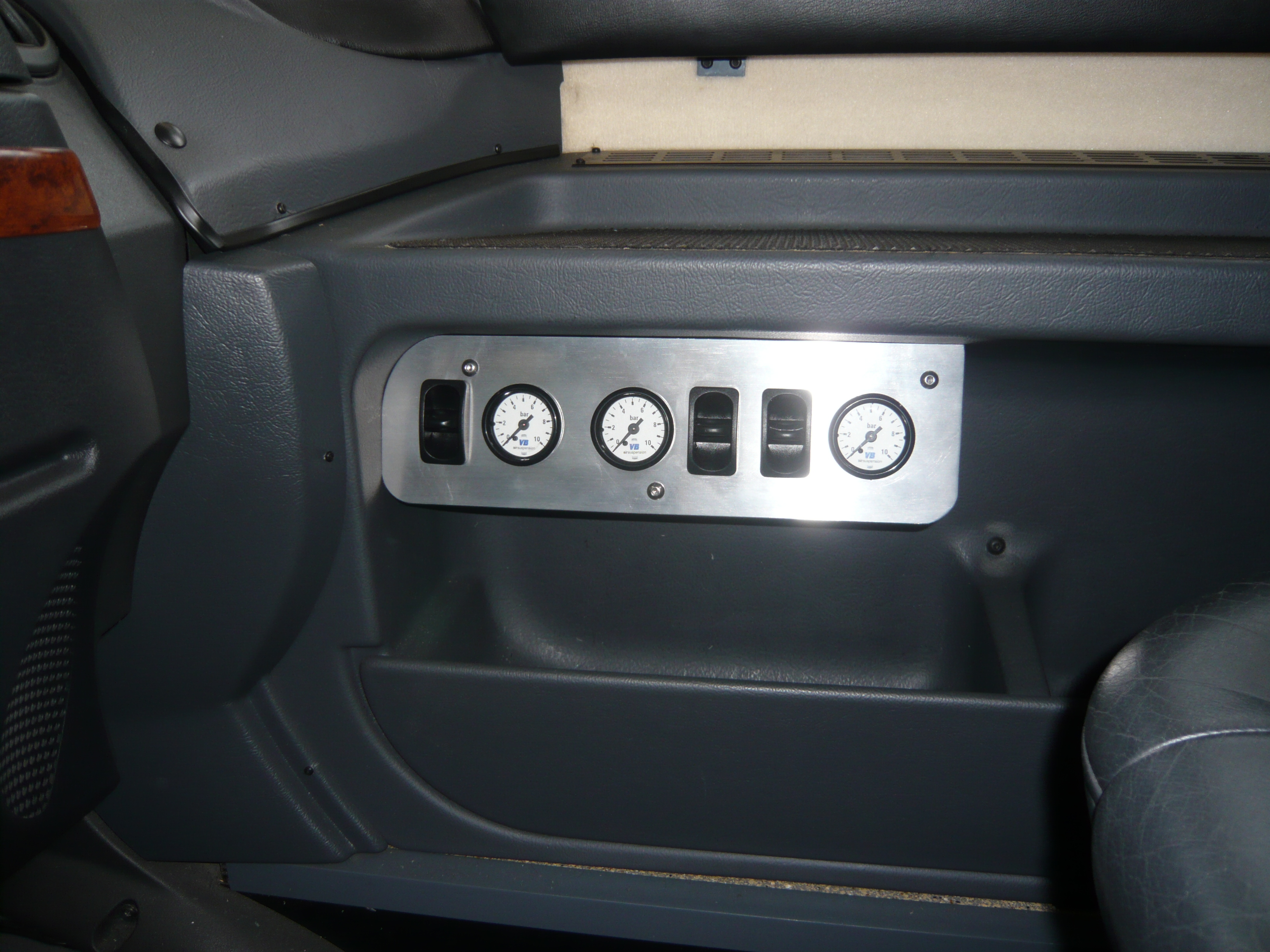 As the Flair is an A-Class there isn't an 'off the shelf' surround for the dials that control both the front and rear suspension.  Our 'man who can' Sam made an aluminium mounting plate that could hold all of them.  It was installed where the passenger door would be (it was also a left hooker for the keen eyed!) 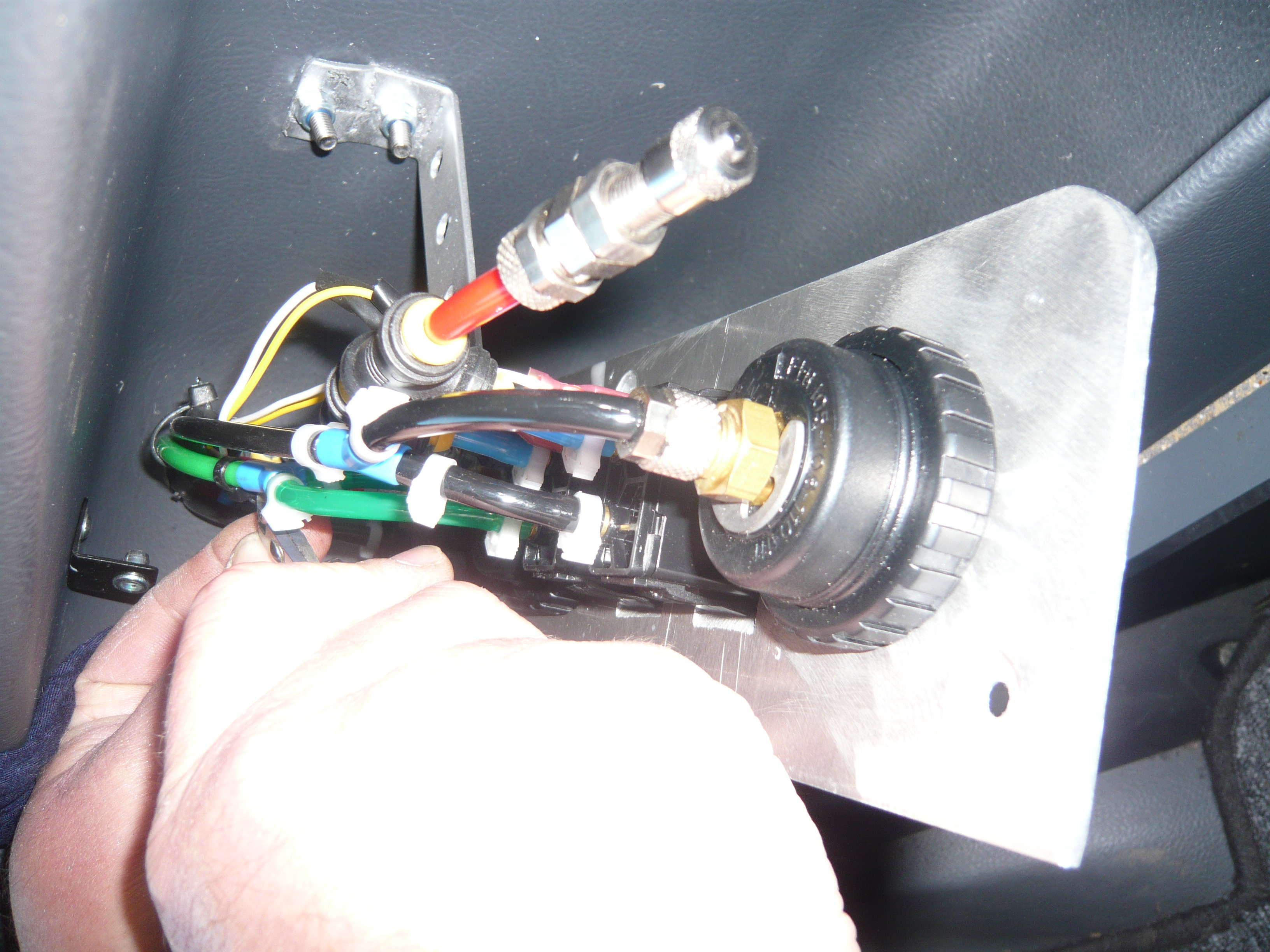 Back of the aluminium surround

The compressor is usually installed in-board in a locker or cubby hole, in this motorhome we couldn't find a suitable position to mount it in so installed in front of the drivers side front wheel.  Sam the man made another aluminium plate for the compressor to sit on but it also had the added benefit of being protected from road muck. 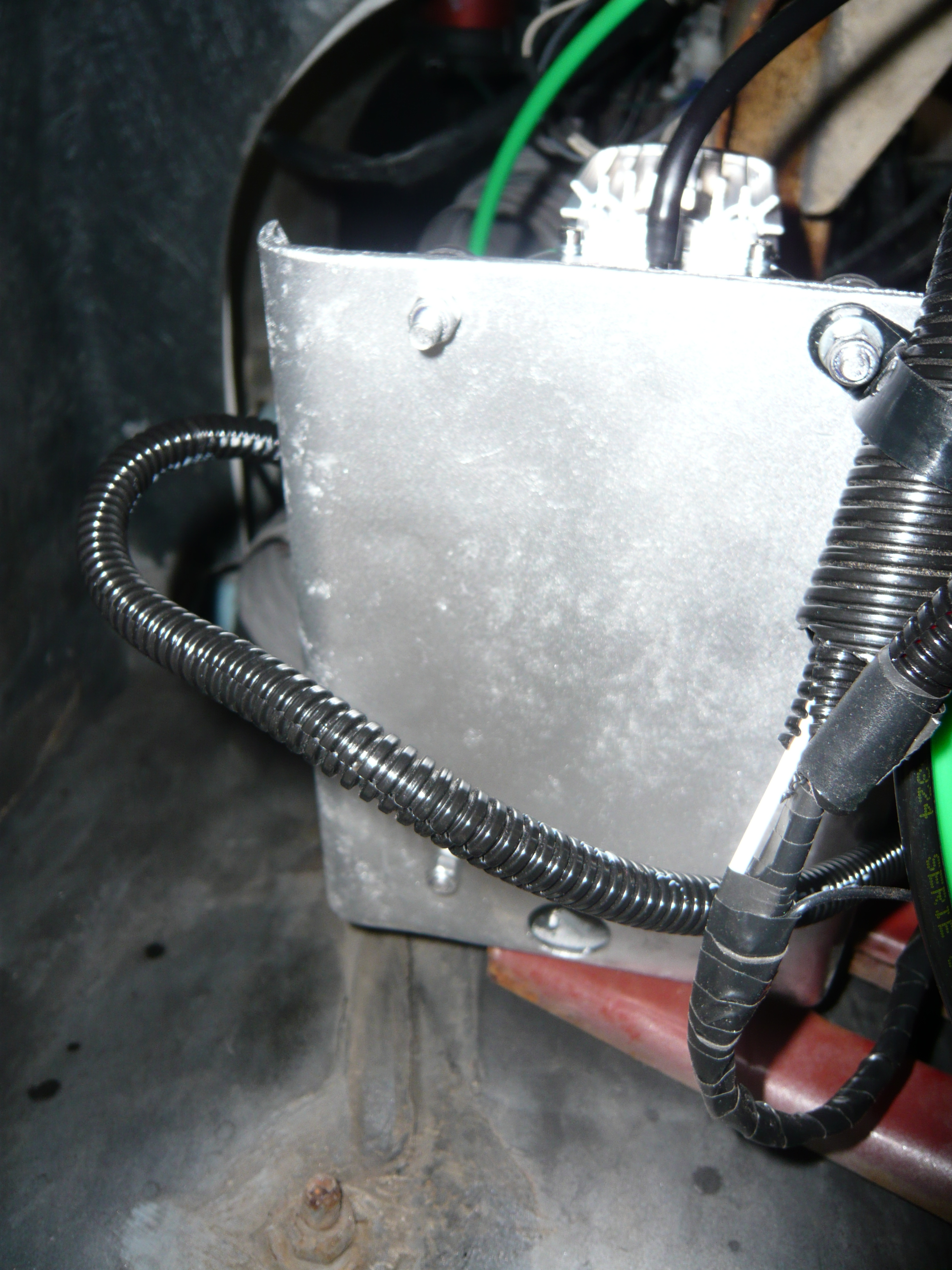 All in all Lee was with us for 10 days having all of this work done, he became part of the furniture for the time he was here.  We all became entirely accustomed to hearing gentle snoring coming from the waiting room!  We were quite distressed to hear that Lee missed his wife's birthday because he was here for so long, so we got her a a box of choccies and an orchid to say thanks for letting us keep him away for so long.  We are looking forward to hearing from them both on their travels to hear how they are getting on with their freshly 'pimped' motorhome.

for our ususual jobs, industry insight and special 'friends' benefits.