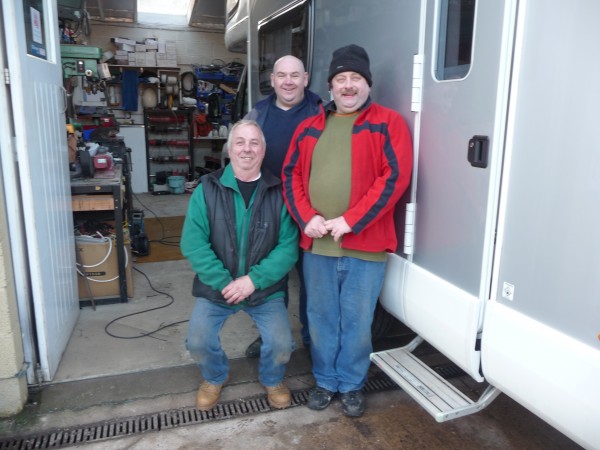 A few weeks ago we introduced you to our Sales and Management team, this week meet the guys that do all of our installation work.

Graham began his career as an apprentice, gaining a City & Guilds in motor vehicle mechanics before moving into coach driving and maintenance in the early 1970′s.  After 13 years he moved on to working for the Shropshire Green Keeper Association, maintaining their equipment and landscape gardening on a grand scale.  He was part of the team that landscaped the Belfry golf course, planting over 400 trees.  Graham has a keen enthusiasm for motorsport and for many years was involved in organising, running and marshalling events up and down the muddy country.  He began with Conrad Anderson in 2003.  Graham is father to 6 children and grandfather to 7 grandchildren including 1 bump. Graham trained at the University of Life.

Andy began working at Conrad Anderson in 2005 having been made redundant from Rover when it closed that year.  Andy began his career with the RAF, working as an electrician on Jaguars for 3 years.  He had a couple of years in Engineering inspection before moving on to Rover where he did a whole range of things during his 15 years there, including paint and working on trim and electrics.  Andy has an amazing memory for facts and figures, he is definitely your man for a quiz team.  He can remember all kinds of things about vehicles, hence his nickname.  Andy is trained in 17th Edition electrics, ACOPS LPG certificate & CITO 12v wiring electrical testing and inspection level 2.

Sam’s career began at a Plumbers merchant before training to become a maintenance engineer for a chocolate factory where he worked for 15 years.  In that time he was covered in chocolate on a daily basis (if only!), tinkering with the machinery to keep it working in tip-top-choccy-choc condition.  Before joining Conrad Anderson in 2008 Sam worked for Maxell in security, where to keep his brain ticking in his spare time he collected stamps, built computers and tinkered with Land Rover defender’s.  Sam’s nickname in a previously life was ‘Animal’ but we like to call him ‘Steptoe’ after his love of skip diving! Sam is trained in 17th Edition electrics, has an ACOPS LPG certificate & CITO 12v wiring electrical testing and inspection level 2.

for our unusual jobs, industry insight and special ‘friends’ benefits.